No bear sightings this trip (September 19-21)

No bear sightings this trip (September 19-21)

Two years ago my wife and I went to the park in mid October and had perfect weather. 60-70 degrees and sunny during the day and almost no people.

Bear jam consisted of about 10 vehicles. Even Dunraven Pass was open when it was supposed to be closed for the season the week before. We wanted to experience the park again when it wasn't crowded but had some concerns with the weather so decided to go in mid September. Originally we were going to camp at Canyon but the night before we left our house in Minnesota I ended up booking a cabin in the Lake Lodge area which was a great decision because after the first night we woke up to about 8-10 inches of snow and most of the park roads closed to travel.

We live in a suburb of Minneapolis and about 14 hours drive away from North Entrance. We left that Wednesday afternoon at about 3:30PM and we were in Gardiner at about 8AM. We took highway 94 as that is almost two hours faster than taking 90 through South Dakota. It was a pretty uneventful drive, mostly semis, some deer near the highway (one was in left lane) and a speed warning in North Dakota by a state trooper (I was going 84mph then 82mph, speed limit is 75). When we arrived at the North Entrance the park ranger was not enthusiastic about the Dunraven Pass opening at all and suggested we go back to Bozeman and through West Yellowstone. We made a stop at Mammoth Visitor Center and the ranger there was pretty optimistic about the road being cleared by noon. There were not many cars in the visitor parking lot and the elk were just hanging around undisturbed. No matter how many times I see them I'm still amazed at their size.

We continued on to Lamar Valley to see what was happening out there.

Plenty of opportunities to see bison, pronghorn and bighorn sheep but besides that it was pretty quiet.

We drove around for a bit but the most exciting thing we saw was law enforcement pulling someone over for speeding. We stopped at Tower because the road was still closed and took a little break while checking the road updates on the web site. At about 11AM road was opened and we continued on. Road was wet but temperature was 34-35 degrees so that was not an issue.

After checking in and unloading the car we went for a drive out to Hayden Valley to see if we could possibly see a bear but it was pretty quiet. Snow was falling and bison and elk were pretty far from the road and not moving much.

After leaving the valley I decided we take a drive on east entrance road to see if our bear was hanging out around the Nine Mile Trailhead but it was pretty quiet.

Despite the relative quietness and increasingly bad weather we were still excited to be in the park and were looking forward to the next day.

As I mentioned earlier, we woke up to about 8-10 inches of snow on the ground.

We also woke up in the middle of the night because the power was out and the cabin was getting pretty cold. It turned out the whole area was without power and even the restaurant in the hotel was unable to serve hot breakfast.

It was sometimes after 11AM that the roads were opened and we were eager to get going on our only full day in the park. Drove through Hayden Valley but, again, not much was happening.

Stopped at Artist Point to see the falls. Continued on to the west side because we wanted to see the new overlook of Grand Prismatic Spring. I think they did a pretty good job with the trail and the overlook location.

We stopped for a meal at one of those restaurants near Old Faithful and then continued southbound. There were several elk near West Thumb.

Since we weren't hungry we just drove past the cabin and back to Hayden Valley. There were several cars parked at the Grizzly Overlook so we stopped to see what they were observing. There was a really nice guy who was pretty excited to share his spotting scope and show us the four young wolves out in the distance, however, only two were visible at any time. We spent several hours there watching these wolves play and even howl. Despite the lack of bears we still enjoyed the day and seeing the wolves and listening to them howl.

We got up early that Saturday morning (our last day there) and drove out to Hayden Valley to see if we can get lucky and spot a bear. No luck again but the sunrise was great and, even though it was only a second day of fall, it felt like middle of winter which is something we never experienced in Yellowstone before.

We checked out shortly after 10AM and the Dunraven Pass road opened at the same time so about 95 minutes later we were out of the park and on our way home.

Thanks for reading this ridiculously long trip report. Hope you enjoyed it.

I did post several pictures to go along but they don't seem to be showing up.

Thanks for the report. I'll bet the snow was beautiful, but it does create some challenges for wildlife viewing.

Sometimes I can find the pics. 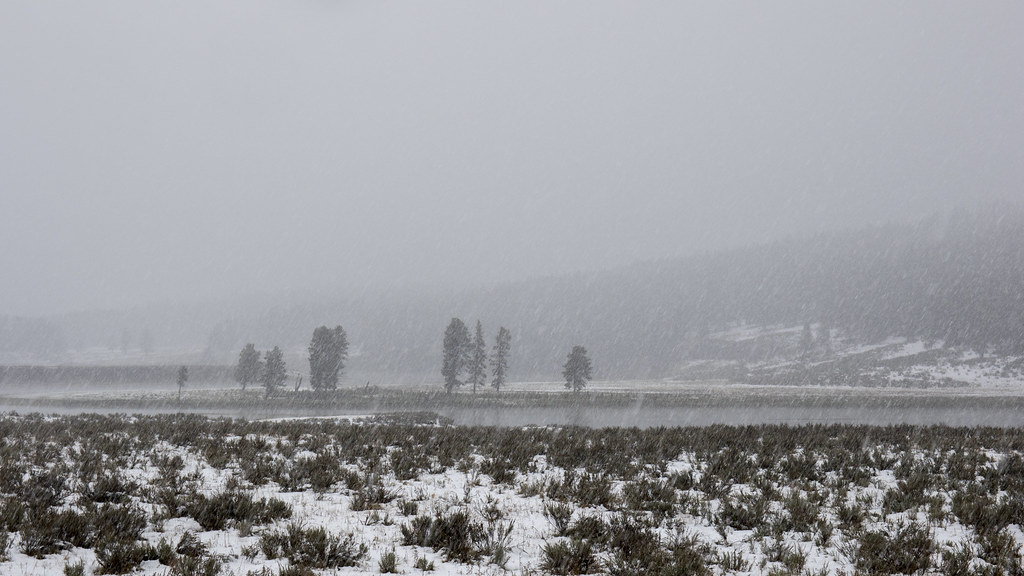 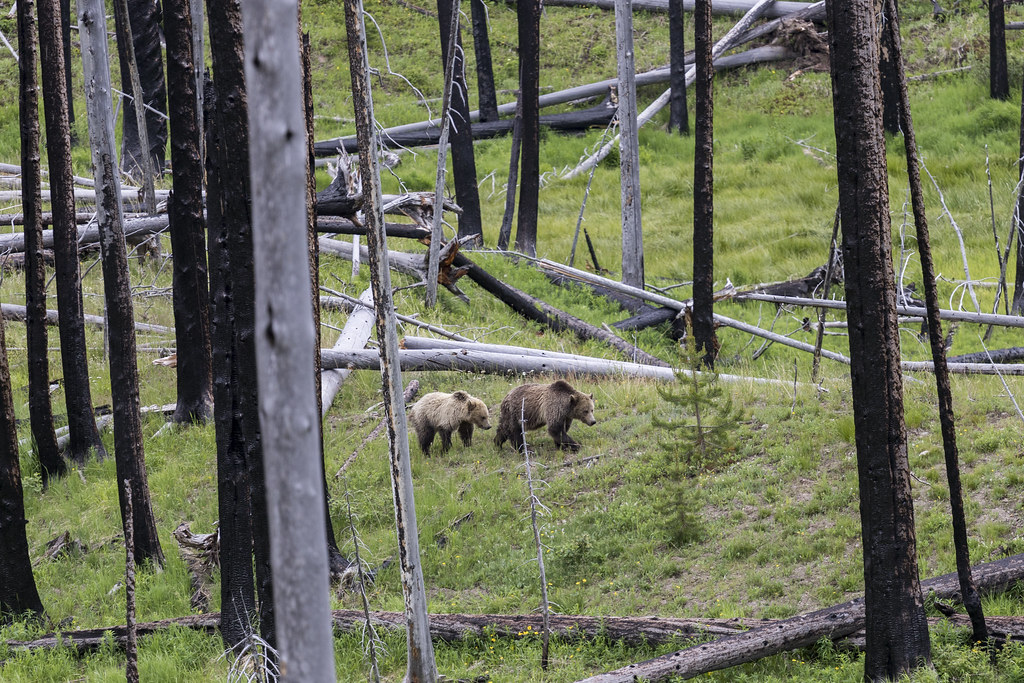 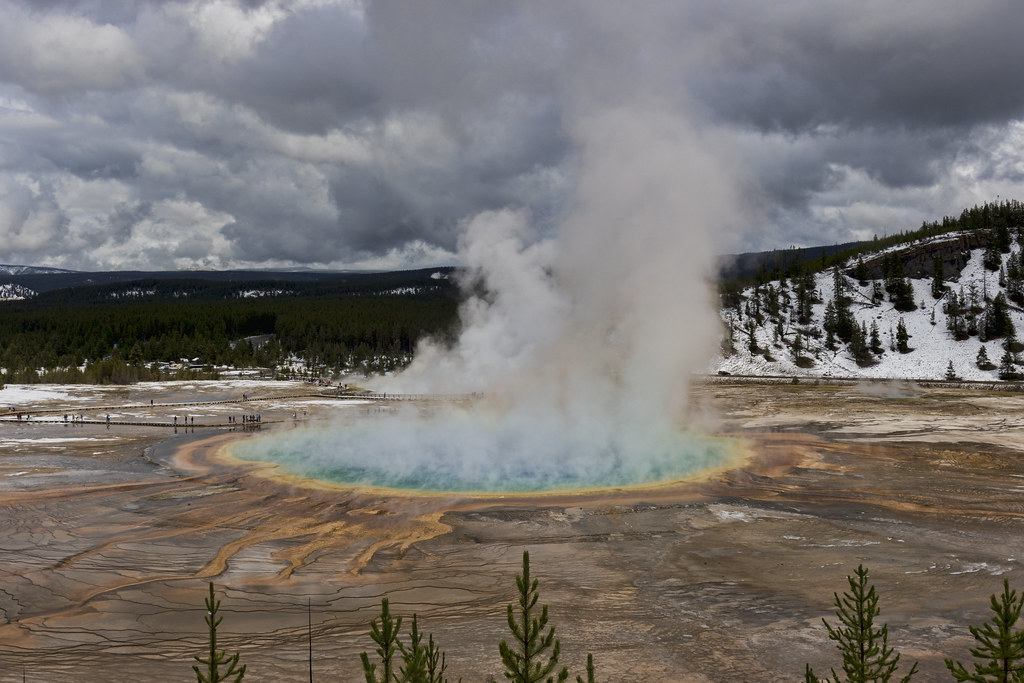