After visiting Market Lake on my drive up North I arrived at Jackson Hole on May 11th. I had a campsite in Gros Ventre. The park road North to Yellowstone was scheduled to open on May 14th. I had reservations in Gardiner for May 16th. So I had five full days to look for bear 399 and her family of four cubs. I cruised around from the Signal Mountain area, across the dam and up to Leaks Marina my first day. I am always a little anxious my first day in the park when I have not been there for a while, and on limited time. I am never sure if I am in the right area and a little desperate to see something. Fortunately, my first day provided a lot of good photo opportunities and that first day anxiety went away. Even though I did not see 399, I was able to be more patient once I had found some good wildlife photo sessions. 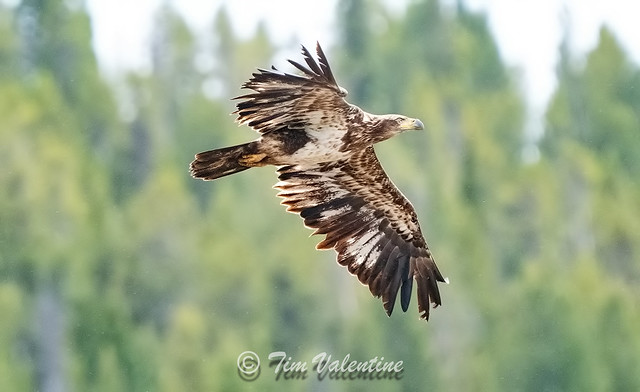 This fox had been collared and monitored for being too habituated to humans. The day of this picture he was seen eating from a bag of discarded popcorn near Jackson Lake lodge. 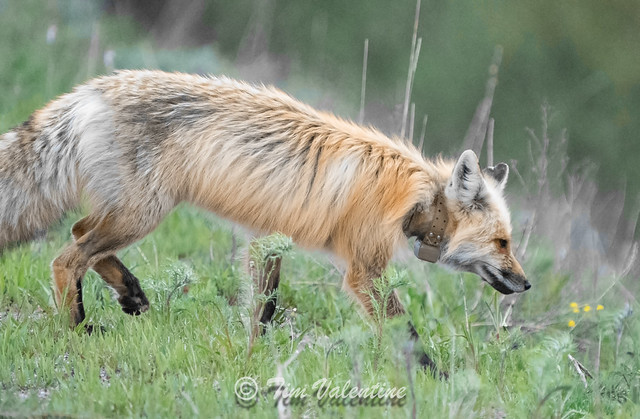 This sub adult sow grizzly was reported near the dam keepers’ residence on the south side of Jackson Lake dam. The rangers hazed her away to the east. 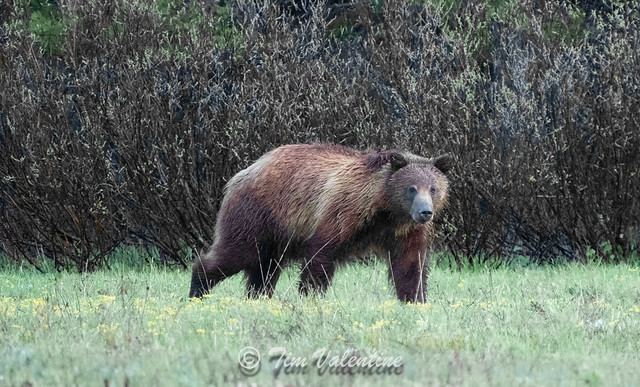 We observed her safely from below the dam until she swam the Snake river. She then quickly exited and immediately started up the fisherman’s trail back to the west were all of the observers had lined up. There were no rangers present so it was up to everyone to scramble away safely with no prompting. Fortunately, there were no close calls. 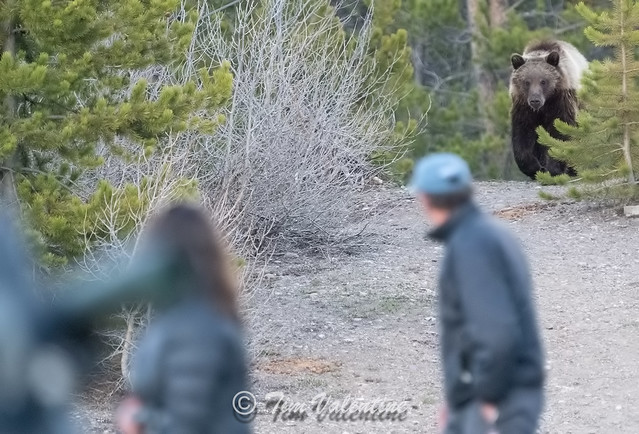 Taken from the safety of my vehicle. 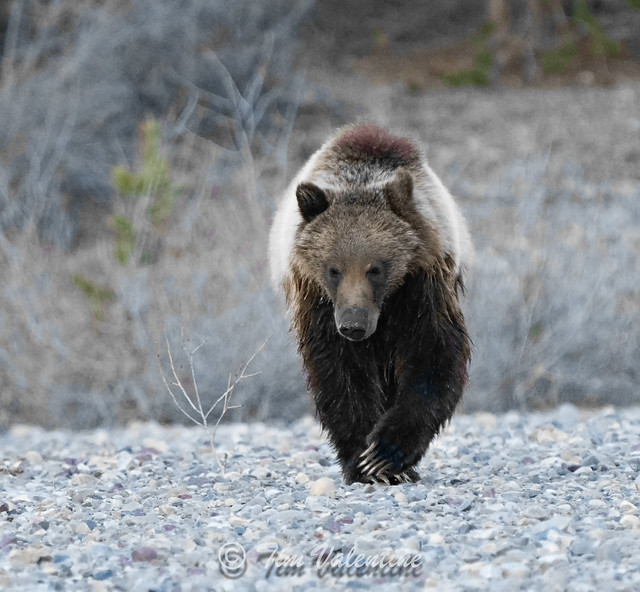 Near the water there were many warblers to be found. Audubons Warbler 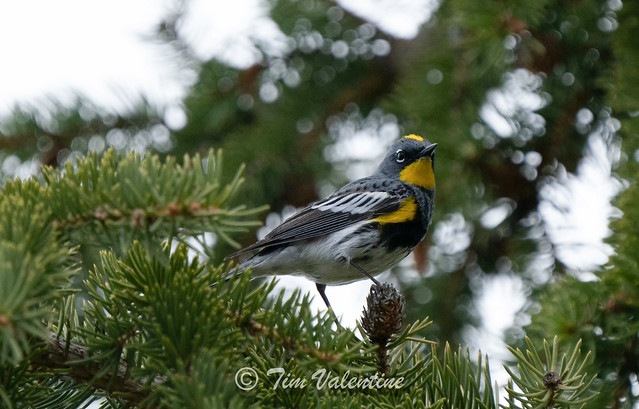 Each morning and evening there were great landscaping vistas not to be missed. This one had a dusting of overnight snow. 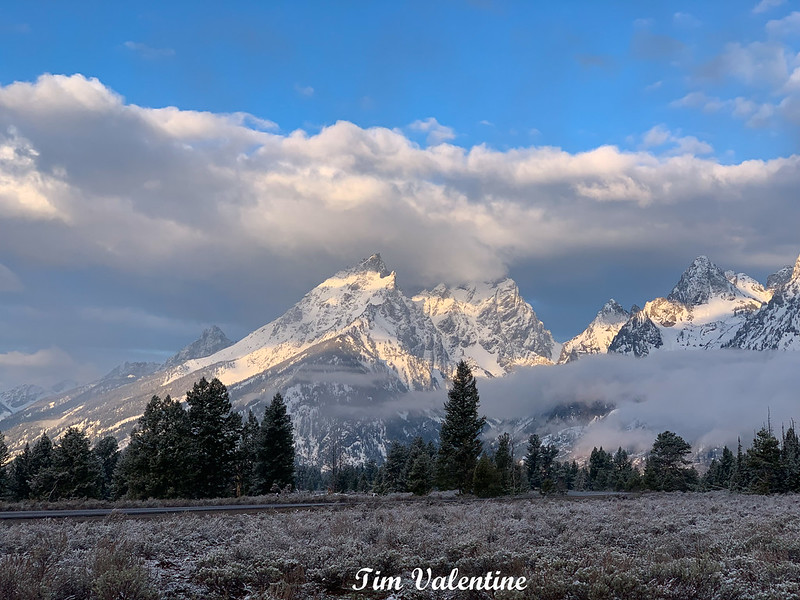 I went looking for a reported porcupine sighting at the Taggert lake trailhead. I found a Pine Martin instead. It had taken up temporary residence under one of the horse stables that border the lower trail. 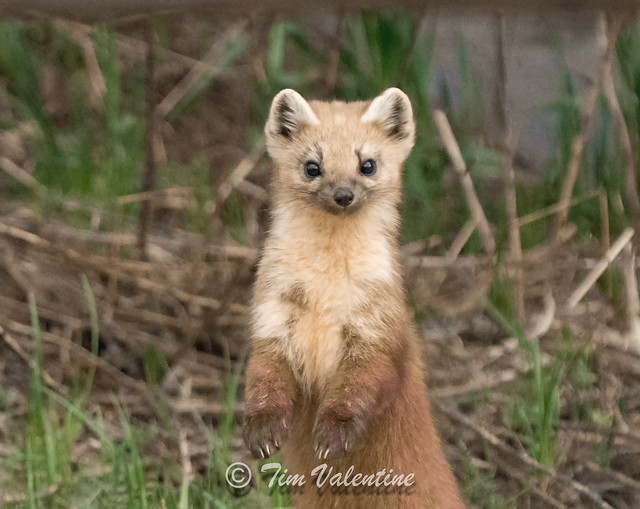 Back near Colter Bay huge crowds of fans were searching for any sign of Grizz 399 and her family. These two sub adult grizzlies kept being spotted in the same area to sighs of disappointment even though they were very cooperative and photogenic. 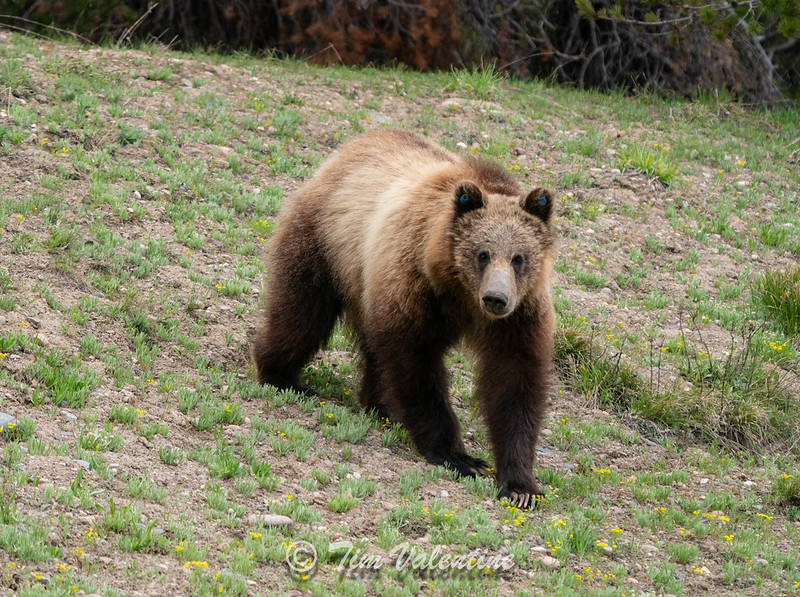 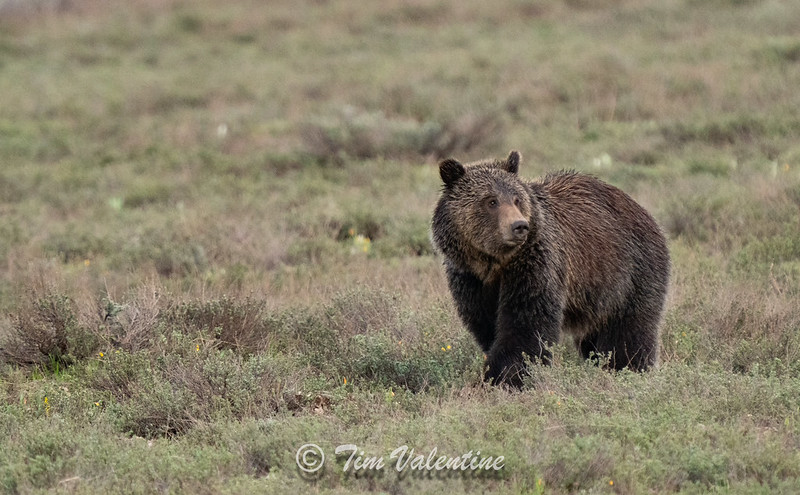 They were not related but had teamed up and were seen foraging together for the entire week. They seemed like good pals. 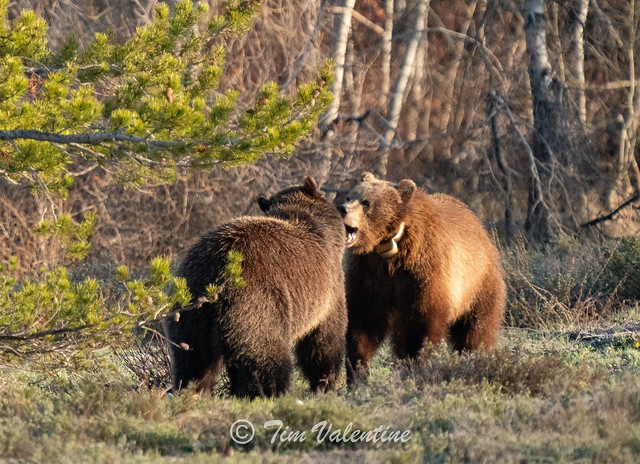 They would often forage right up to the edge of the road. They really liked the small yellow flowers in the greening meadows.
Blond 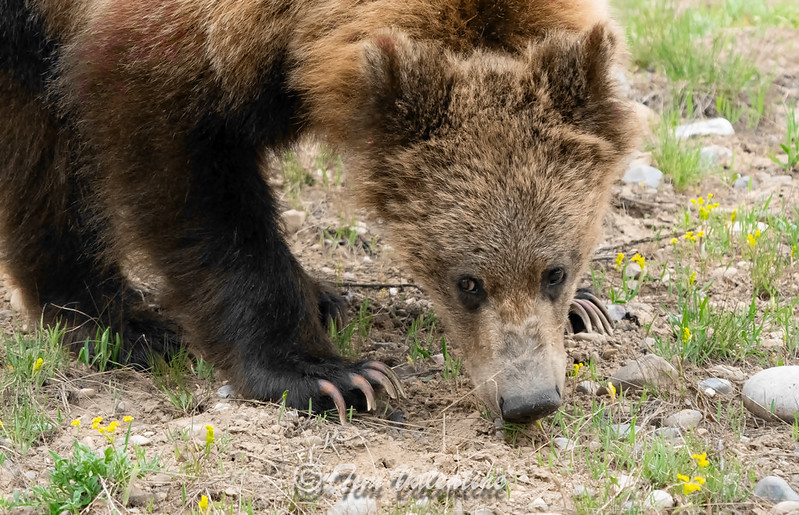 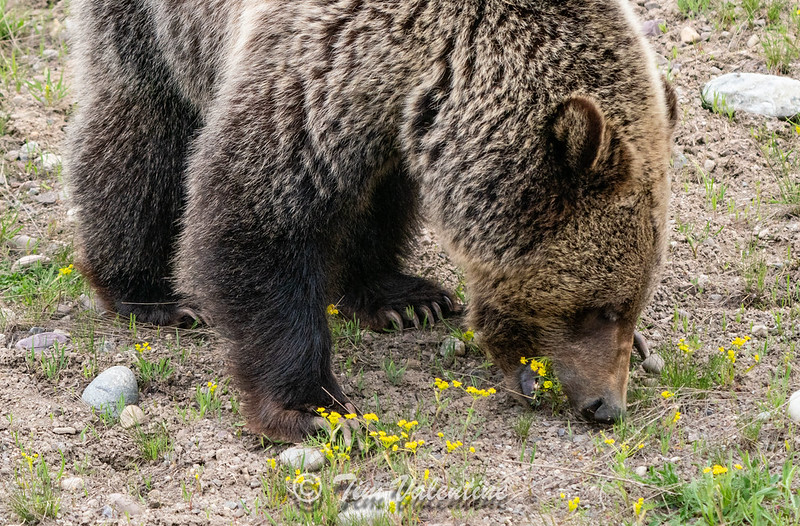 The blond bear is a character and had been in trouble near the Colter campground. He had a collar on.
Maybe these two will be romantically connected somewhere down the line. 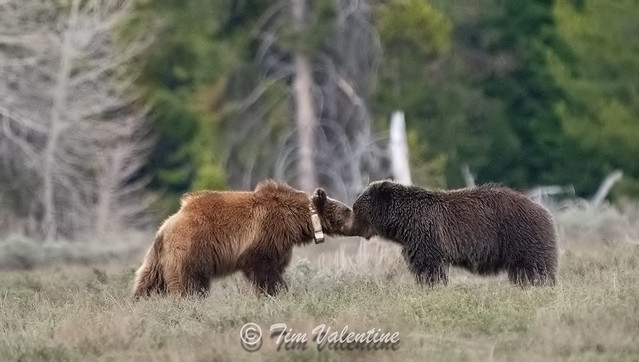 I had heard of some cubs of the year being seen near Deadmans so I spent some time near the river.
Beaver Ponds 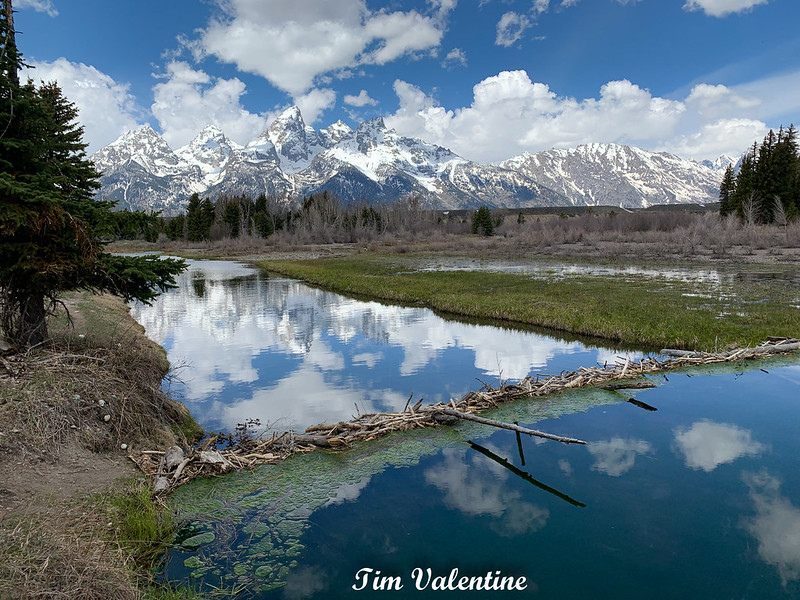 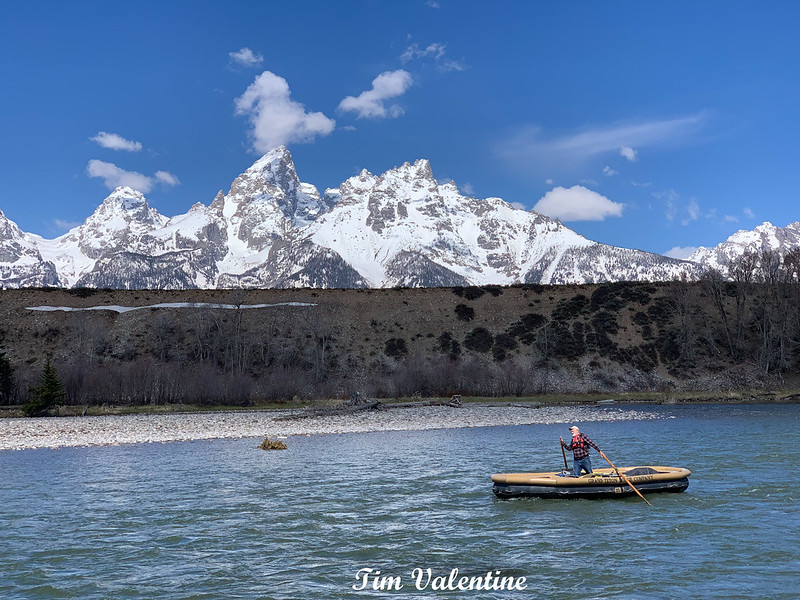 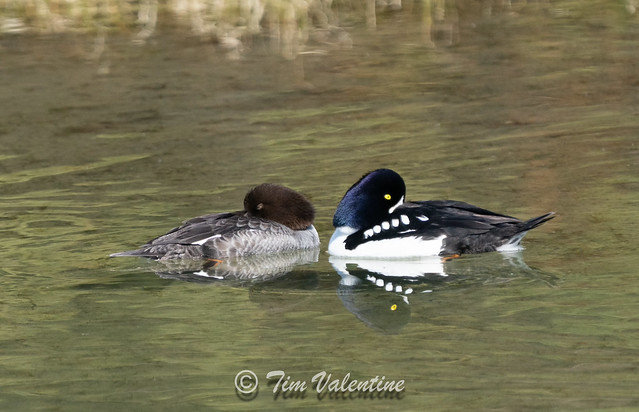 These Robins were bathing in the backwaters of the Snake river, 20 feet from each other. 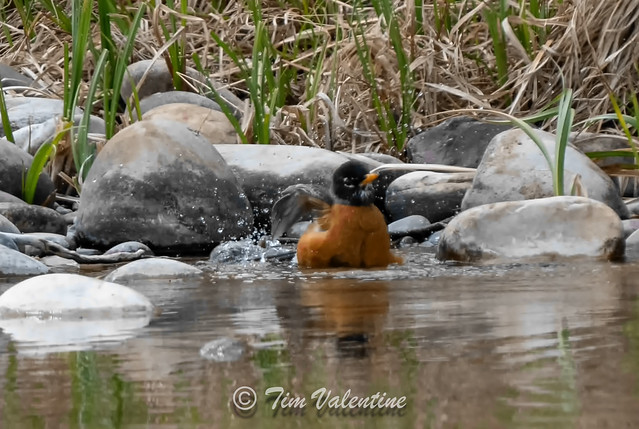 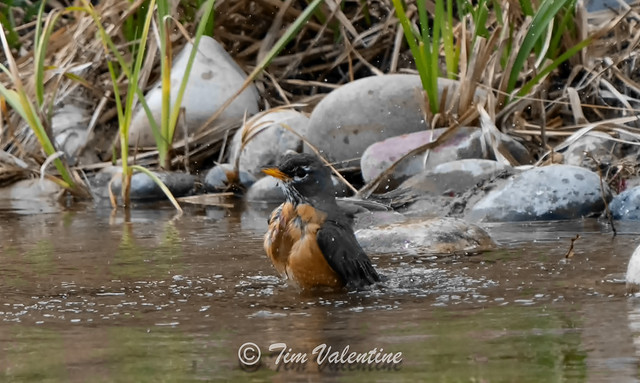 I was really disappointed to see the behavior of people driving their cars on the morning that the northern road was being opened to Yellowstone. Everyone was speeding north….way too fast. At elk flats, some Teton folks were stopped on both sides of the shoulders of the narrow road, to observe the grazing bison. The Yellowstone seeking horde barreled right thru the area going over 70 mph with one car trying to pass the others in the left lane. It was dangerous for people as well as wildlife. At the Moran gate, I complained to the rangers and he said he was well aware. One of his coworkers had nearly been run down by the same cars before the gate opened since none of the drivers were slowing to the posted 15 mph limit. I suggested next year they get a radar gun out and pull everyone over. Just because everyone is speeding doesn’t make it right.
The good news was that Teton park was noticeably less crowded for the next few days. They opened the road up to Signal Mountain. I went looking for Grizz 399 up there, but found a displaying Grouse instead.

Dusky Grouse at the top of Signal Mountain behind the antenna building. 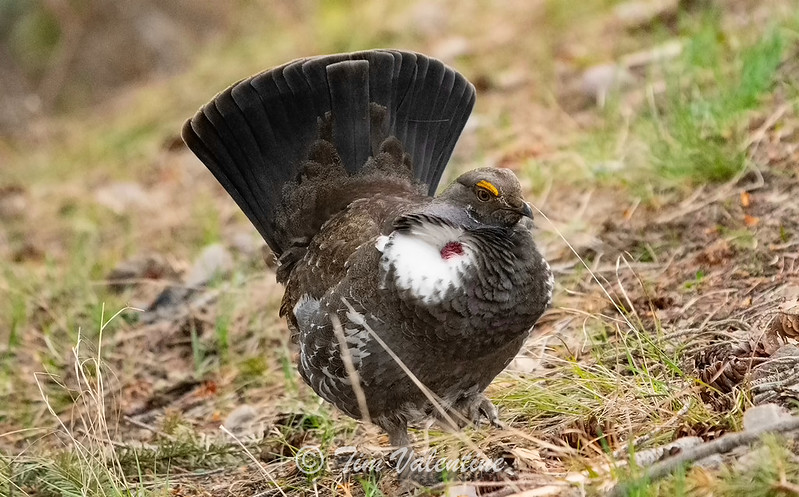 At this point it was time for me to leave the Tetons for my week in Yellowstone. I had seen a lot, including maybe a glimpse of 399’s rear end. But I was not fulfilled and decided I would keep tabs on her news, with the possibility of returning to the Tetons after my YNP week, if she was still being seen.

This next portion of the Teton trip report covers the dates of May 21 – 23. Up in YNP not many bears with cubs had been seen yet. Wolfs were active, but the YNP guides were having a hard time putting their clients on any bears or bears with cubs. So that made it easier for me to decide to return to the Tetons a day earlier than I originally planned. At Oxbow bend, I encountered my first ever Osprey jam. This osprey caught a trout right in front of the folks parked at the bend area. It then proceeded to eat the trout on a perch right above the overlook parking area in plain view of the eastbound park traffic. Those going westbound could not see what the eastbound folks were looking at so it made for a real traffic mess. This went on for over an hour! 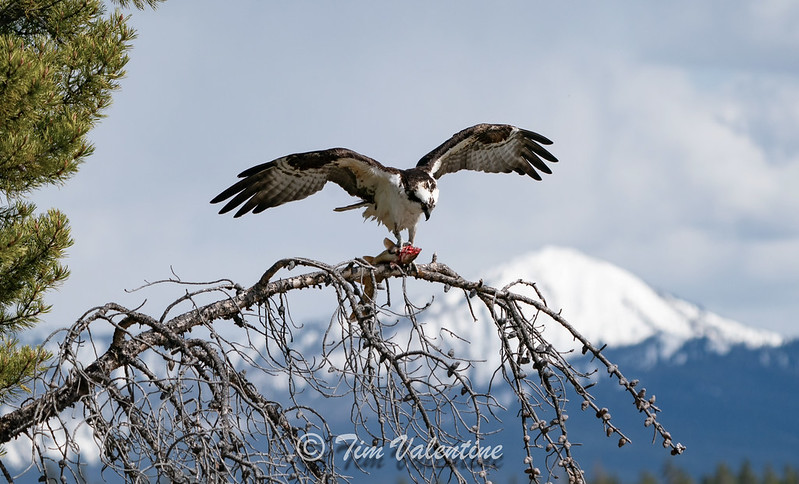 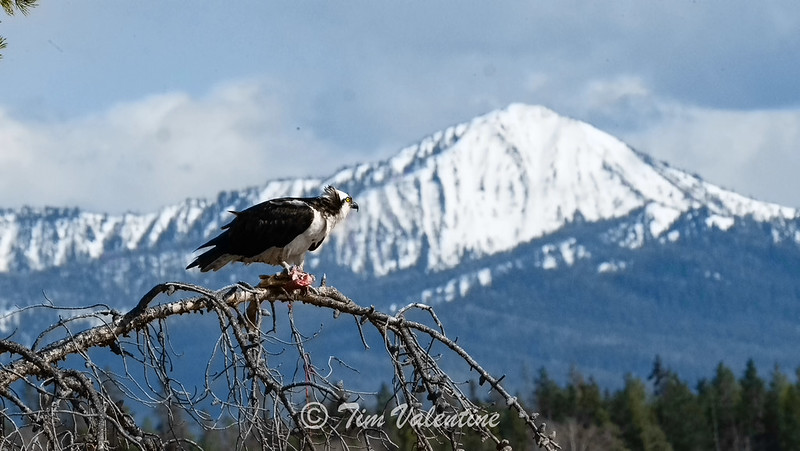 In only five days time there was noticeably less snow on the range. 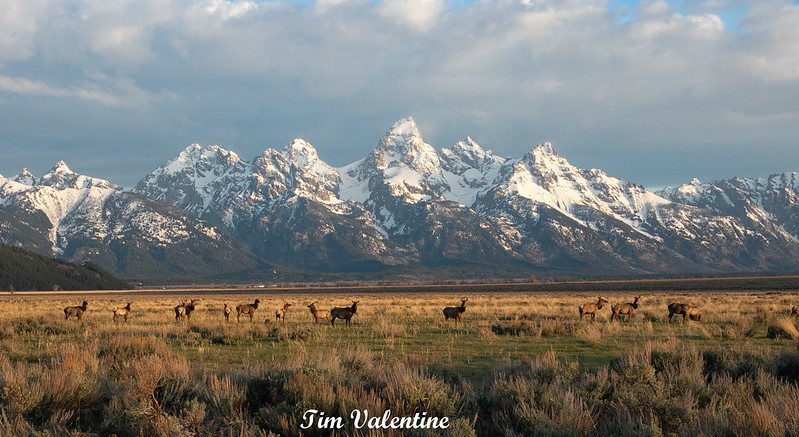 While in Yellowstone I had been given a tutorial on Great Grey owl behavior by guide Evan Stout. As I was driving the teton backroads looking for 399, I spotted a grey blob in a grey tree. 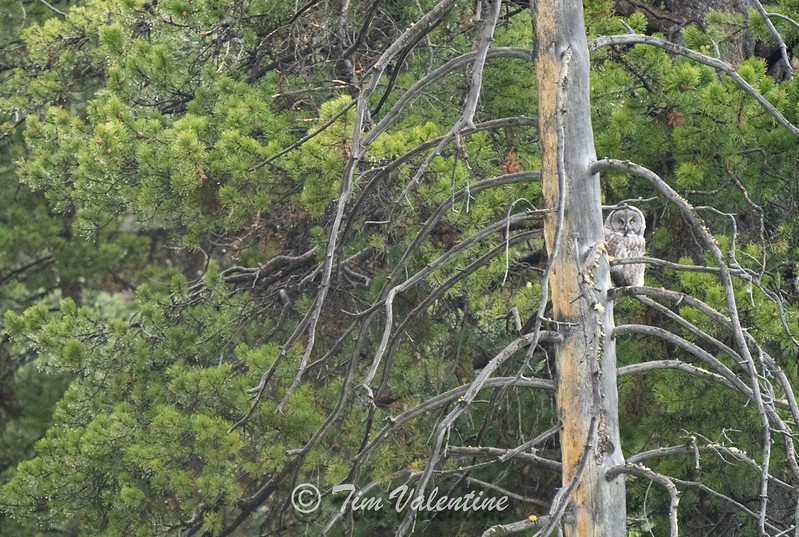 It was a very satisfying find. There were only four of us present. For one gal this was the bird at the top of her lifetime bucket list. We all high fived after getting our fill of pictures. The bird stayed perched and was hunting and cooing quietly until the light faded into evening. 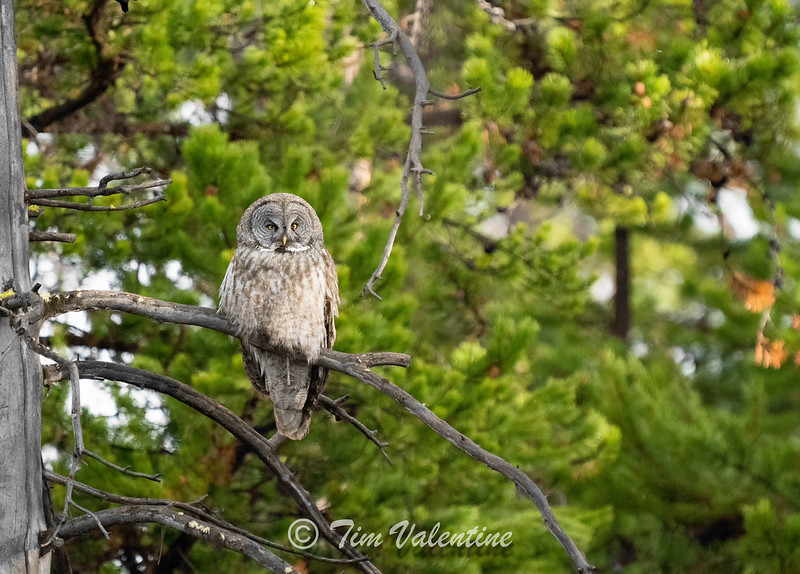 The next morning I got up early where Grizz 399 had last been seen and watched a good sunrise over Mount Moran. 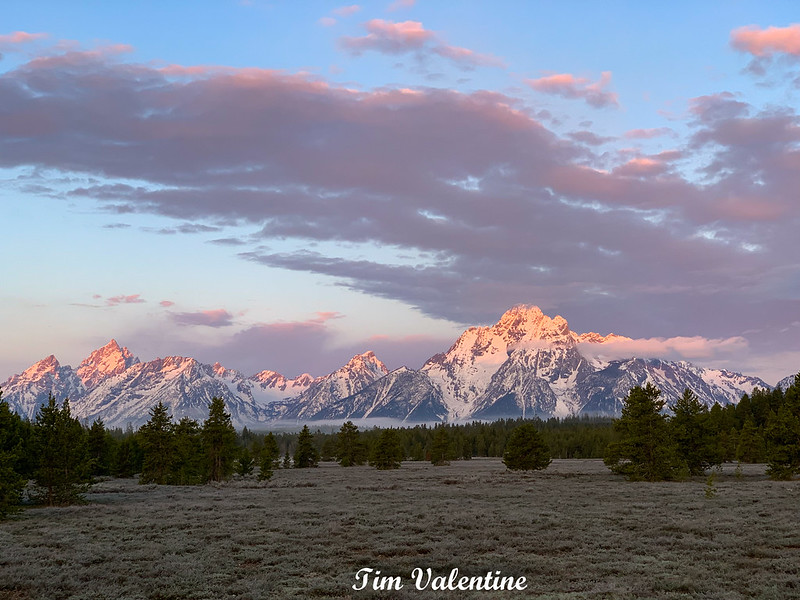 Later that morning she appeared with all of her 2nd year cubs intact near the Colter Bay village entrance, trying to cross the road. I was fortunate to view her and also take some pictures. She had all four cubs but it was really hard to get all five family members in one frame. It seemed like there was always one cub straggling along or buried in the edge of the forest. 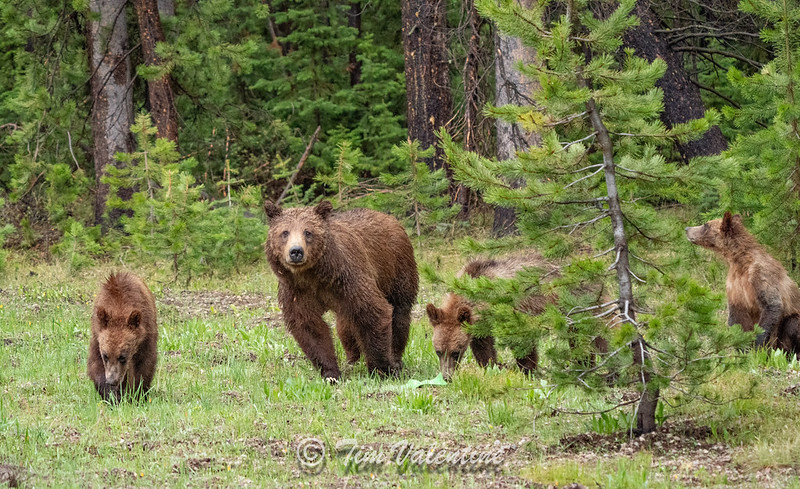 She kept the rangers busy as she grazed the family parallel to the road for almost a mile. 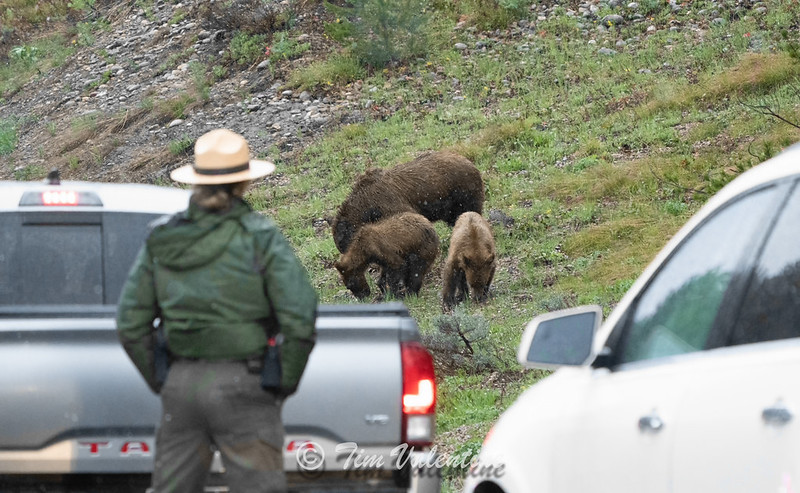 A storm of sleet and snow ended the viewing for the morning. With more weather on the way, I decided it was a good to time to head home. It was a great ending to a great trip. I will post the YNP trip report soon.

Sounds like a great visit Tim.
Unfortunately, the male pair of those two subadults you were watching (one of 610's cubs) was killed by Wyoming Fish and Wildlife a few days later after getting into the garbage in a residential yard near Jackson.

Well that is sad. Too bad there is not enough wilderness to relocate him far, far, away. Thanks for the update.

He'd been relocated once, up to the Fishing Bridge/Lake area of Yellowstone, but he made his way straight back to the Tetons. I think they should have taken him to the Lamar.

My goodness, what a lot of great photos and a wonderful report. We were up there just a bit after you were there and totally missed 399, tho' we looked and looked for her. Still, had a great visit, but just loved reading about yours and seeing all those photos. And a PINE MARTEN! We saw one once, but have hunted and hunted for another and never seen one again. Just love that photo in particular! Just a great report.

What a great report! Thanks for sharing with us.