On Wednesday mid-afternoon we decided to take a drive into Hayden Valley to see if the Wapiti wolves were visible. The roads were still very slick in a few spots with ice from snowmelt and refreezing. But we made it over OK. As we were driving into Canyon, there was a coyote in the field. Just before we got to Hayden Valley there was a large elk herd in a field near the trees. We drove the length of the valley and there were a lot of swans (not sure if they're trumpeters or migrating whistlers) and Karen thinks she saw an otter. But nothing else of note. We were debating whether to park and wait until closer to sunset or start heading back. We decided to start heading back, thinking we could see something on the way. Turned out to be the right decision (for once!).

We saw the coyote again, this time mousing, and got a couple photos before continuing our trip back. 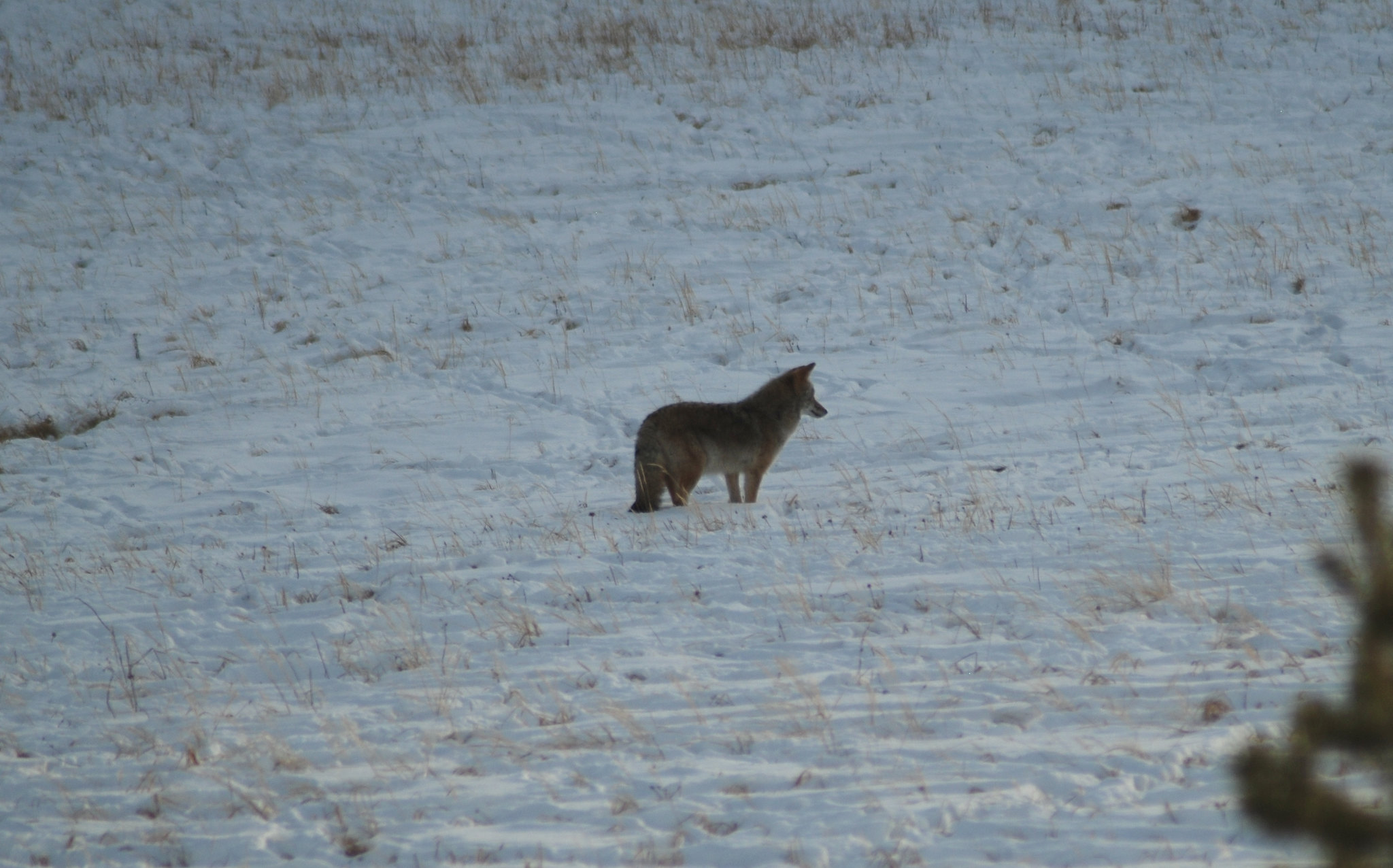 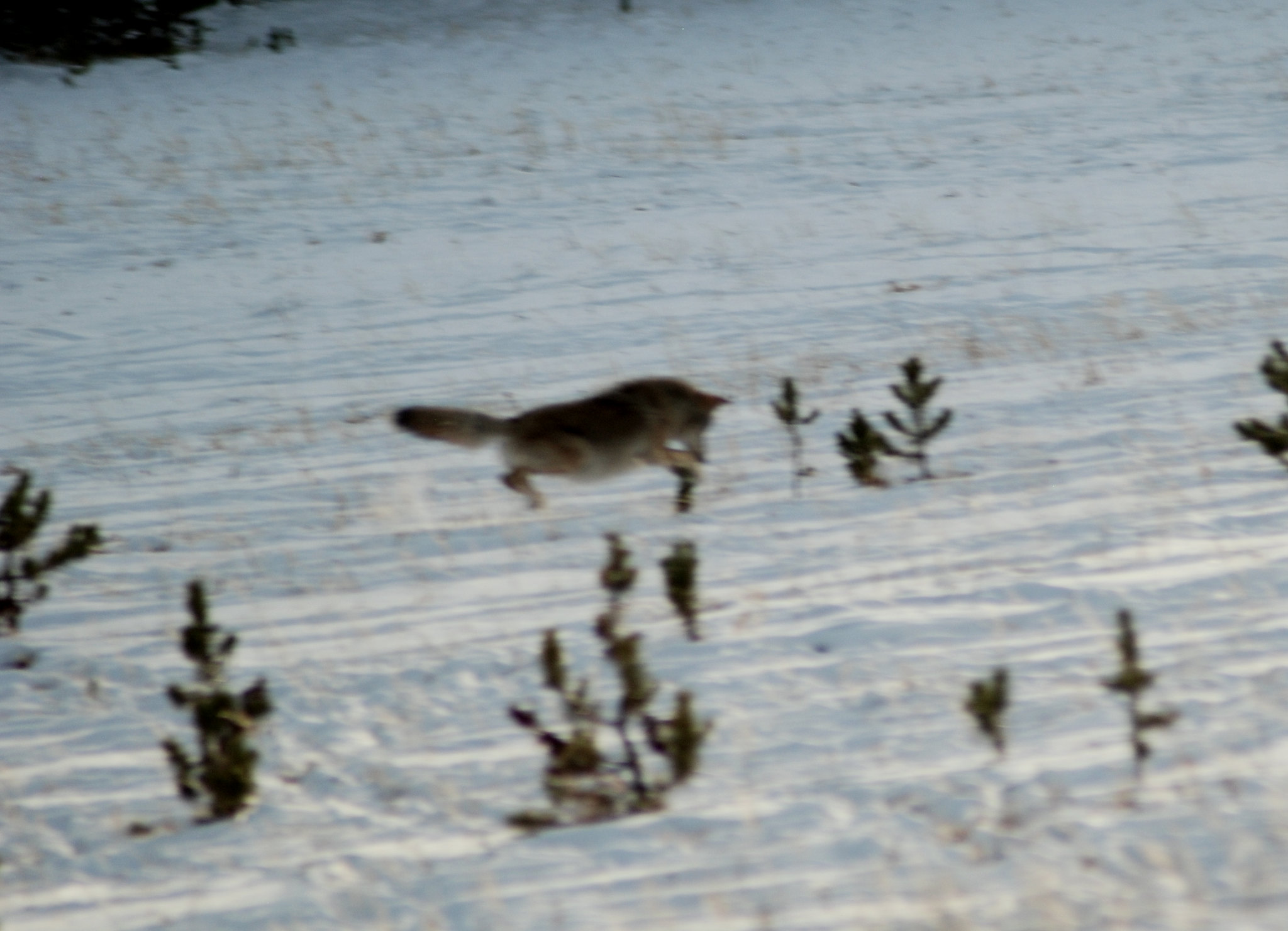 As we turned west at Madison Junction we could see a beautiful sunset starting to form. After about 4 miles we noticed two cars stopped on the opposite side of the road and we figured the elk must be around. As we passed, we didn't see anything. So Karen, who was driving, asked if we should turn around or just keep going. Bill replied to turn around as he thought the one guy was looking pretty intently at something. After we found a place to turn around, we made it back and Bill asked what they were were seeing. Wolves!!! Bill grabbed the binocs and jumped out while Karen parked. Sure enough just on the other side of the Madison River there were wolves in and out of the trees. Bill waved Karen over quickly so she could get a look and there were more than a dozen moving further into the trees. Karen ran back to get the camera, but they were all into the trees heading back to the east, so no photos. However, we did get a good look at several of them including a very white one--the Wapiti alpha female!!!

One of the guys there told us he counted 19 or 20 wolves, so I'm assuming it was the entire pack! Dusk was beginning to fall but there was still a gorgeous glow to the west and the full moon was rising in the east. We decided to drive back to the east to see if we could see them again. We drove for about a mile looking for a good place and we found a spot where the terrain would cause them to come near the river and out in the open if they continued down that far. We waited for probably 20 minutes and it was starting to get darker. We were about to give up when Karen said "Here they come!" A black was leading the way and the others followed. The white alpha was in the middle. We were able to watch them move almost single file along the river in the moonlight.

We didn't count but there could have easily been 20. We tried to get a photo but it was too dark. However, Karen was able to get some video with her cell phone. It's pretty grainy, but you can definitely see them--almost ghostly images just in time for Halloween. I shot some video with my old Sony so we'll see if that turns out. If we can figure out a way to post video, we'll add it here.

We drove in the next morning hoping to see them again, but they were nowhere to be seen, at least by us. So who knows where they went. I know the Wapitis wander quite a bit but I didn't realize they would make it that far down the Madison Valley. It was rather ironic that we went all the way to Hayden trying to see them and they were an hour closer to us! As we drove out there was still a glint of deep red on the horizon which gradually faded with the full moon peaking in and out between the mountains. A beautiful end to a special moment in our favorite place on earth.

Thanks for the report! How lucky you were to make the day special with your sightings and your sunset!