After seeing everyone's pix of Rosie and her cubs over by Tower this year, I thought that some of you might enjoy seeing and meeting the very first Rosie and her two cubs, Yogi and Boo Boo. My most memorable encounter with Rosie happened in September 2004.

Hubby and I were visiting some friends who were hosting at the Tower CG at the time so we decided to camp there for the night. It was shortly after 2pm on September 9, 2004 when Rosie unexpectedly, showed up at the CG with her two cubs, Yogi and Boo Boo. Like most bears in September, Rosie and her cubs were pigging out, preparing for their upcoming winter hibernation. In an effort to fatten up her cubs, Rosie paraded them through the campground, sniffing every camp site, digging through all the fire pits. From the fire pits they then went on to tipping over all the water jugs and coolers that were sitting out in the open on the picnic tables and benches. With only 3 people around (the host, me and my hubby), the 3 bears seized the moment. After all, a yummy feast was at hand and hardly anyone was around.

After snarfing down a bag of chips and licking the water from the water jugs, Rosie proceeded to take the cubs for a leisurely walk along the CG road where she showed the cubs another new survival lesson... how to strip berries off the wild rose bushes. The cubs watched Rosie as she stripped and ate the berries. Then she grunted at the cubs ordering them to do the same thing. So Yogi and Boo Boo stood up on their hind legs and stretched as high as they could, stripping the berries from the top to the bottom of the bushes....just like mama. But poor little Boo Boo. He tried and he tried but he was such a tiny cub, that he kept losing his balance and would fall over, every time he got too high on his hind legs. The memory of that afternoon will always be with me. It's not often that I get such an intimate three-hour solo photo session with a black bear mother and her cubs. I was so taken with Rosie that I have followed the comings and goings of some of the Yellowstone bear families in the Tower and Slough Creek areas ever since.

Rosie was viciously attacked and fatally injured by large male black bear several years ago while protecting her cubs of the year. If I recall correctly, a local ranger said that Rosie was close to 19 years old when she died and had given birth to numerous cubs in her lifetime. I'm not sure what happened to Yogi after our first meeting at the Tower CG in September 2004. For all I know, he might still be in the Tower area. But Boo Boo, being so small and and so dependent on Rosie, couldn't make it on its own and died the following winter. While I was sad to hear about Boo Boo, it makes my heart smile knowing that a new Rosie with cubs is in the Tower area this year. Can't wait to see them.

It took me a while to find my original 2004 pix of the original Rosie. But they're posted at my Flickr site if anyone would like to see one of the most famous black bear mothers of Yellowstone. The pix were taken on September 9, 2004 at the Tower CG and appear at the start of my Flickr photo stream. Here's the link: https://www.flickr.com/photos/bigskywild/

For those of you who remember the original Rosie and were fortunate enough to get to know and photograph her over the years, I'm sure that you probably remember and miss her as much as I do. Still, it's comforting to know that Rosie's genes and lineage live on, along with our special memories of her. So this post is for you, Rosie. You were quite a gal and an amazing black bear mother. More importantly, you were a classic example of the powerful magic and majesty of the Yellowstone bears. And for those of us who were fortunate enough to get to know you on a more personal level, we will never forget you!

As a relative newcomer to Yellowstone, I didn’t have the fortune to meet the original Rosie. I have spent time with some of her namesakes over the years though and have formed attachments to various Park denizens that I encounter from one year to the next. Posts like yours keep Rosie alive for those who were blessed to share special moments with her over the years, while simultaneously introducing her to others like myself. Thanks for sharing those wonderful memories.

Foxfan, many thanks for your kind words!

What a sweet story! I don't know if I ever saw the original Rosie -- my group was just getting started "finding" animals in Yellowstone in the early 2000s, so I'm not sure we got over to that area and actually saw bears back then. But I loved hearing about Rosie and Yogi and Boo Boo and their trip through the camp ground. I do remember how excited I was when I realized I'd seen "Rosie" and her cubs some years back after I'd joined the Yellowstone.net forums and read so much about her. It was thrilling to realize my mom, sis and I had actually SEEN her and her cubs. It was one of those moments when I fell even more in love with the Yellowstone area and became determined to return to the park as many times as I could each year. So thanks for sharing your recollections and those wonderful photos (lots of great photos in addition to Rosie and the cubs). I always enjoy your comments, reports and photos. This was extra special.

Thank you for the very enjoyable story on that first Rosie and her cubs.

Thanks for the memories, Yellvet.
This was my first real encounter with the old Rosie with the red ear tags. She was coming up the narrow part of road along the basalt cliffs, and as I was entering a curve, a ranger stopped me to let Rosie and her 2006 cubs use the road. This was taken with a 4x point-and-shoot out the window, and she was about 10 feet from my car. Even my cats got to see her up close. 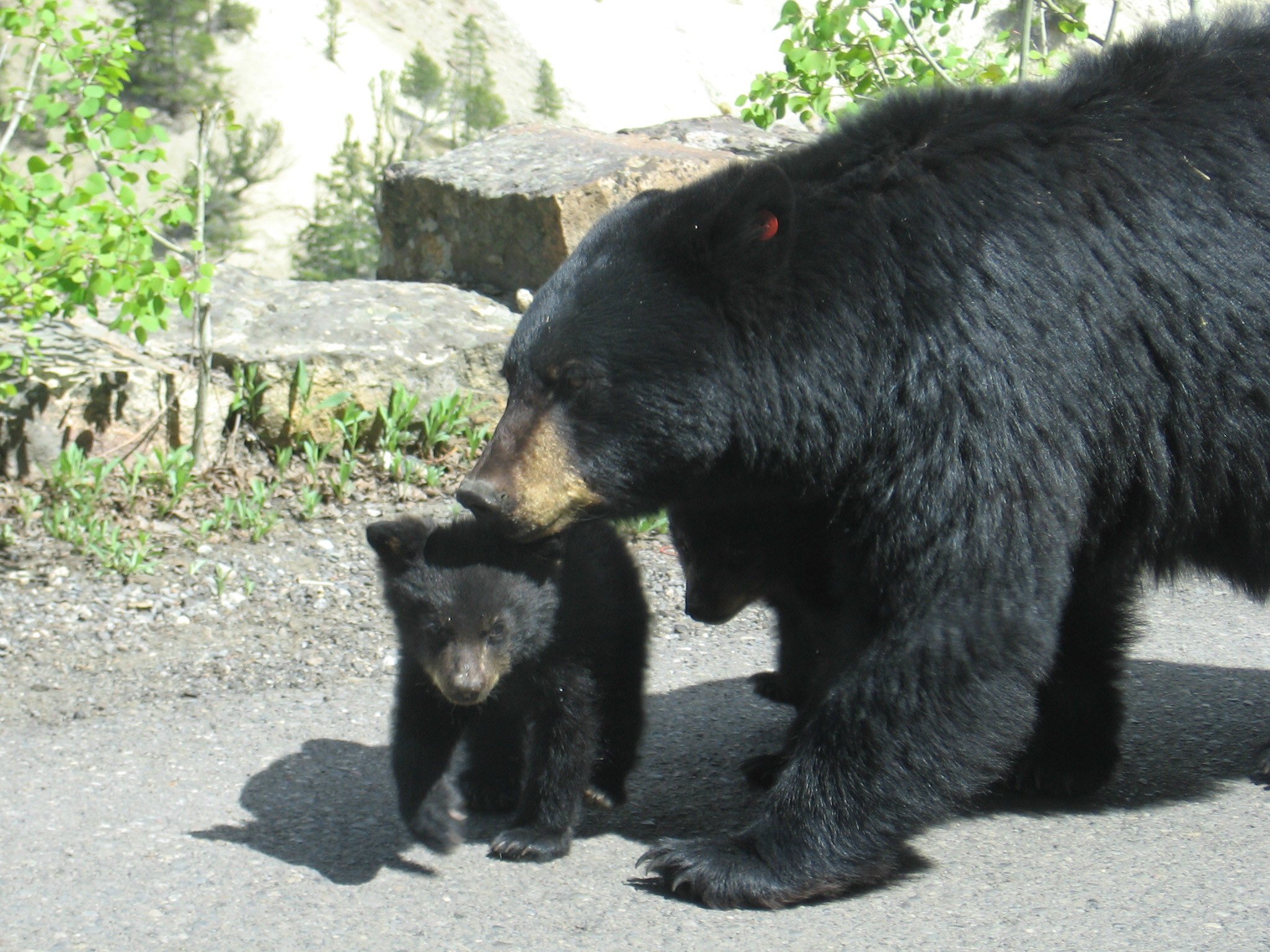 Rosie and 2006 cubs up close by Linda Hamilton, on Flickr
I remember a few weeks before Rosie disappeared for good a woman who worked at the Tower store told me she'd just strolled past the store's door, just like the tourists. And the lady also said she'd come down the hill and stood on the roof of the bathrooms earlier that month looking down at all the people. She was such a character.

Whoa....what a nice shot of Rosie and Boo Boo, Linda. I just came across a couple more pix of Rosie from 2004. I'll add them to my Flickr photo stream tomorrow. You'll get a kick out of one of them. Rosie was standing on her hind legs sniffing the vents at the top of the Tower vault. Someone was inside the vault, so I remember yelling "'DO NOT COME OUT!" When I saw the pic yesterday, I couldn't stop laughing. The look on that guy's face when he saw Rosie towering over the vault was priceless. In fact, I think he went back into the vault, right after he saw her (probably pooped in his pants).

Thank you all for sharing your stories of Rosie. I'm trying to remember when we first saw here but I do think it was on our very first visit to Yellowstone in 2006. She had put 2 cubs up a tree. "Bears in a tree?" I thought. I'd never heard of such a thing. Now I know it's normal. lol

We saw Rosie on our very first trip in August 2008. It was dark and we were staying at Roosevelt. We just had a great wolf encounter in Hayden and hence, stayed a little too long so we were driving back in the dark. We were about a mile or so south of Tower when my wife yells "bear!!!" I hit the brakes and here comes Rosie (the ear tags gave her away) and her one surviving coy which was nicknamed "Choco."

The cub was coming right towards the car, probably to lick the bugs, when Rosie turned to him and grunted and he turned back and they went up the hillside. Amazing. The next day we reported the sighting to Ranger John, and later found out we were probably one of the last to see her alive. What a great experience for our first trip. That was one of the many reasons we've been coming back every year since.