Yellowstone is my favorite, but I'm a huge fan of the Utah parks too. Arches, which is relatively small, and Canyonlands which is pretty spread out are both spectacular, plus Dead Horse State park which is nearby and IMO should be part of Canyonlands. Mountains and red rocks, but desert so pretty dry and not much water outside of the Colorado river. Colorado National Monument is close by too and interesting, if not quite as impressive as the others. The town of Moab is right by the parks with many lodging and eating options, we spend 4 or 5 days there every year. Getting more expensive but not yet anything like Jackson. But I bet it will be in 20 years.

But I'm not done in Utah yet, there is Capitol Reef NP, which while interesting isn't at the level of the others, but still worth a day if convenient, and Bryce Canyon and Zion near each other in the southwest portion. Bryce again is small, but very impressive and great hikes down to the bottom if you have the time. It's my wife's favorite. Zion is a bigger name and has lots to offer also but it can get very crowded in the summer, especially in the canyon where they have mandatory shuttles during the busy season. Bryce is higher elevation so not so warm even in the summer but Zion does get hot. In the same general neighborhood is Grand Canyon North Rim. Much different really than the South Rim, cooler, quieter and needs more work to really get into it. It does have a lot to offer, but you have to seek it out. Conspicuous perhaps by it's absence is Grand Canyon South Rim, which while enjoyable is almost a "can't get there from here" sort of thing from the Utah area. You obviously can, but it's on the order of 200 miles, one way, to get the 10 miles as the crow flies from one rim to the other.

The Utah parks, especially Arches and Bryce, are very accessible with minimal hiking required for lots of sightseeing. Hiking is rewarded if you like, but it's not necessary. And Zion, Bryce (plus GC North) have lodge complexes where many just relax rather than explore.

Here in my home state of California, Joshua Tree and Death Valley both have their points and I think Kings Canyon/Sequoia parks are vastly under rated. Everyone knows about Yosemite and even though it's kind of overrated, it's still a genuine "A" list park. Do go to extreme costs to avoid Yosemite Valley on the weekend though, it's just stupid crowded.

Thanks for the ideas and details! My husband is not a traveler, but will drive after I make arrangements. He did not want to do YNP, but ended up loving it. I asked about ideas for next year and he really just wants YNP again which is fine with me.This time I can reserve within the park, although we really enjoyed Cooke City and West Yellowstone. I will try to work in either some National Parks from Colorado or Utah to see something new. Hopefully my photography skills will be better and I plan to buy a nice lens to catch the critters. I hate that we need to stick to summer months because of school. Anyone have preferences for Rocky Mountain National Park vs. Zion vs. Bryce? Colorado vs. Utah. I see there is lots of info. On Utah and I will write it all down. Too bad Glacier was closed in some areas! Horrible. I went probably 20 years ago and it was busy, but nothing like the parks are today. Thanks! And I will save the Alaska information for the future. The plane fare for 4 deterred me.

If you're interested in Colorado, a nice place to visit for a few days is Ridgway, which is on the west side of the San Juan Mountains. We rented a very nice house there for a reasonable price. The nice thing is that Ridgway is near Ouray and Telluride, so we were able to visit both. Yankee Boy Basin is worth a visit, but you need to own or rent a stout SUV or truck to get there. Some of the group hiked to the summit of Mt. Sneffels. Also, there are a lot of National Forest access roads near Ridgway, and I drove several of them, and was able to observe lots of elk, deer, and a few black bear.

Yankee Boy Basin. I'm told this waterfall was used in one of the old Coors beer commercials. 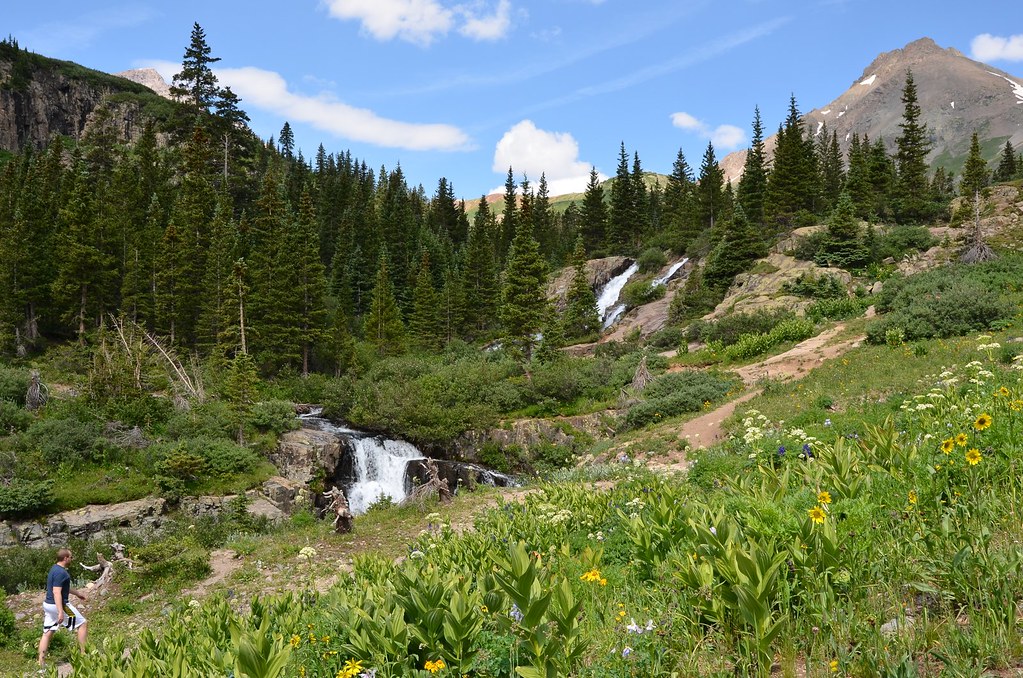 View from back yard of the house we rented in Ridgway. 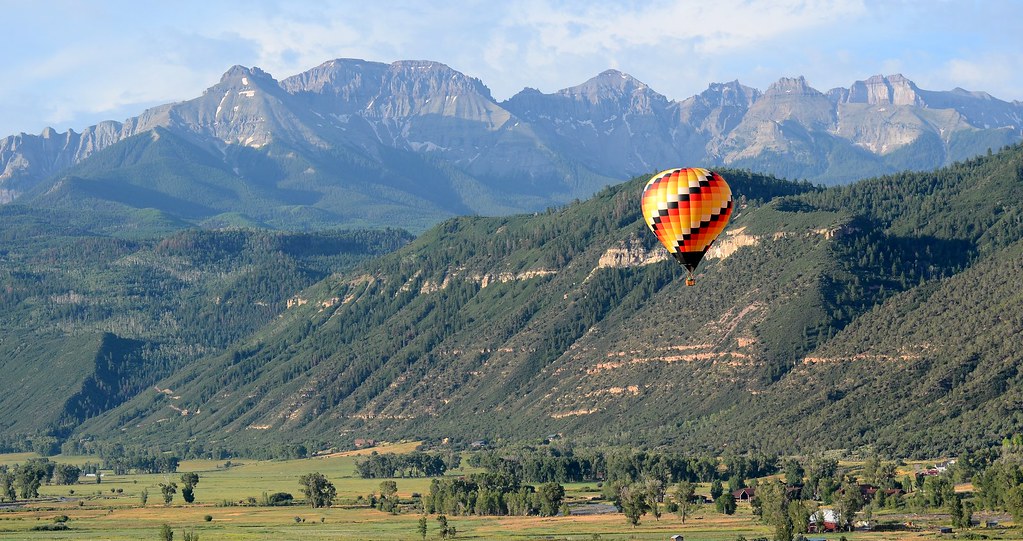 Elk bull I spotted from one of the NP access roads just outside of Ridgway. It was seriously near dark when I snapped it. 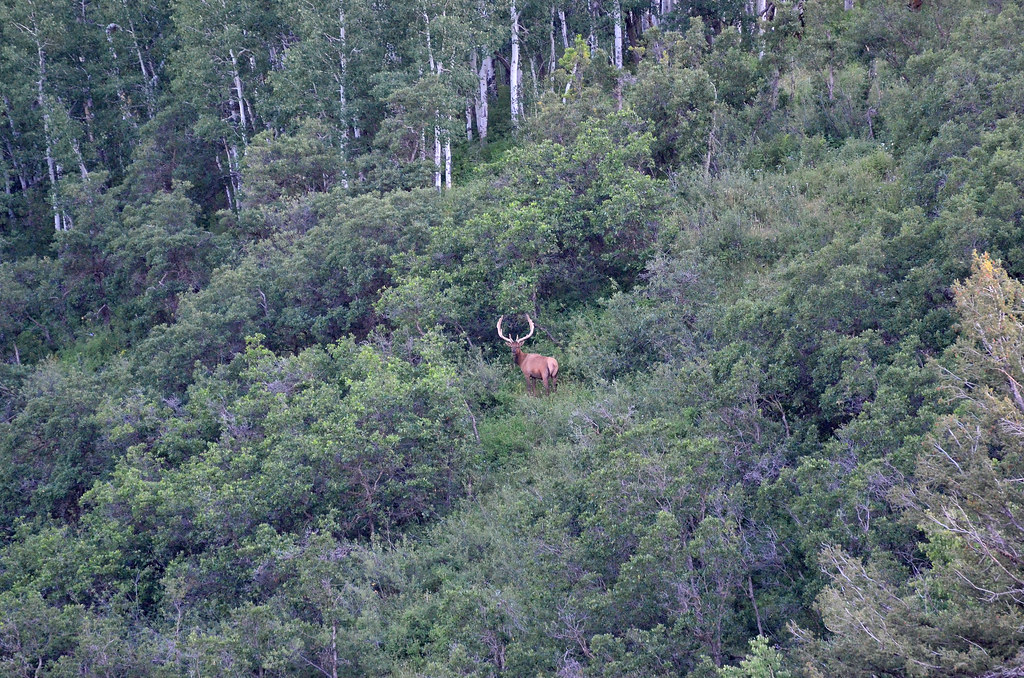 If you are open to the Canadian Rockies, Banff and Jasper National Parks are amazing. 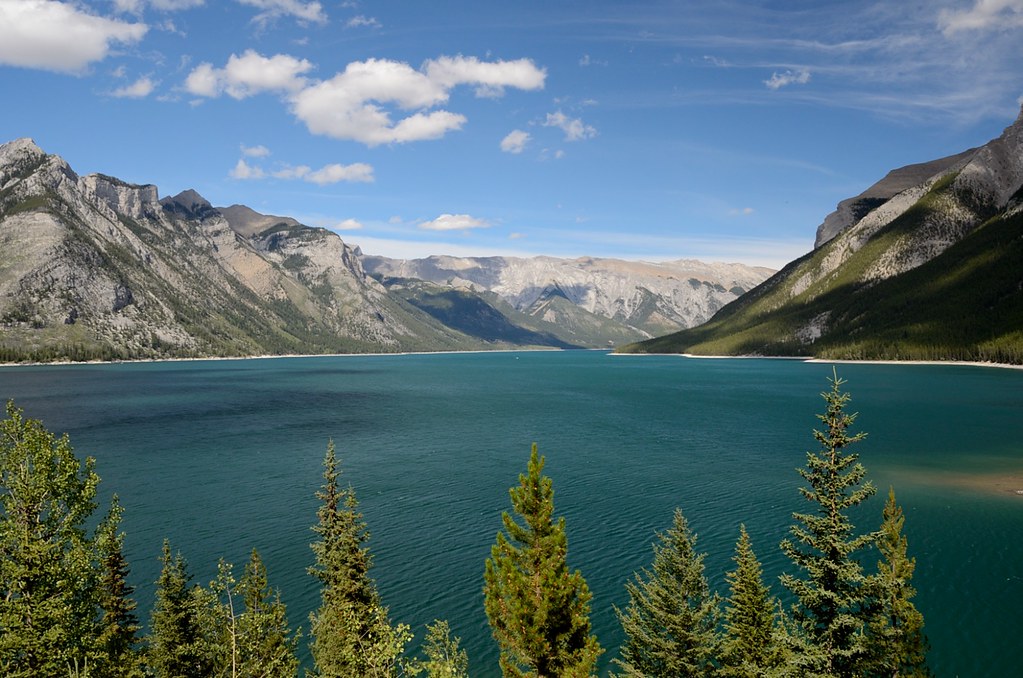